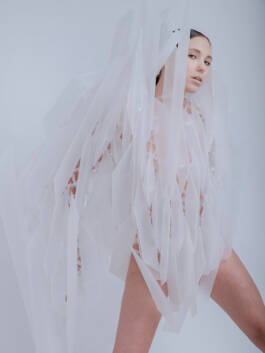 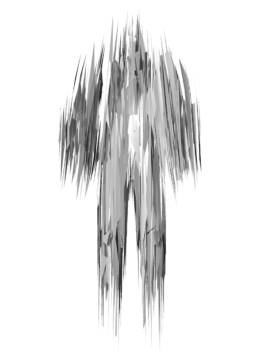 Our eyes move and search randomly.

What if we keep expanding?

I started the process with analogue data (child growth charts) to later transform the information into a parametric design in a 3D environment. The obtained silhouette is then reinterpreted. This reinterpretation of digital visualizations results in physical-tangible forms, shapes, garments.
It is in the presentation of these materialities where the digital media possibilities (digital interventions like projections or virtual reality) invade our analogue resulting bodies creating a new reality, bigger than each one in particular, where the limits between analogue and digital disappear, and the communication between shapes, body and space is fluent. The viewer is immersed in this new expanded reality where the physicality of the objects has changed, and the perception of a garment has been modified. During the process, a new language was created. A modular system appeared and somehow ruled the construction strategy, the difference between materials added an extra layer where homogeneity results from chaotic and random encounters.